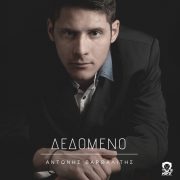 Find the song in all digital stores and all streaming services:

He is one of the charismatic artists who harmoniously combines two of his great loves. Of those artists who have a positive energy and transmit it.

Antonios Varthalitis, although only 31 years old, has felt his presence in the Greek music scene since his very own voice and the confidence shown by remarkable and distinguished artists.

After the success of the performances in theatrical performances as well as in TV productions (“Malista Kirie Zabeta”, “Leoforio o Pothos”, “O koureas tis Sevilis”, “Maria i Asximi”, “Mana X Ouranou”, ” To soi sou”). Depethe Kozanis and the Children’s Theater are currently collaborating. His Lives started as a solo but you can also enjoy him with the Retrox band playing 80s and 90s hits. Antonis Varthalitis returns with a new Digital single & Video Studio Clip titled “Dedomeno” in Music and Lyrics of the same, marking another remarkable collaboration for this new and promising Keys Records artist.