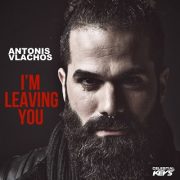 Find the song in all digital stores and all streaming services: ▶
https://bit.ly/2WOshwA

Antonis Vlachos is a musician, singer, performer, Loop Artist. His musical journey begins in 1998, where he has played in bands like Pop, Rock, Funk, Blues, Soul and Metal.
The highlight of his musical life so far is back in 2009 where he traveled to London with his guitar in the back. There he experimented and tried playing in squares, subways, pubs but mainly on the street

Antonis has collaborated with many important musicians and bands, inside and outside the borders.
A multi-faceted artist with endless concerns whose biography lists several successful performances on hangouts and music venues in Greece and Cyprus {Cardiff, Edinburgh, Dublin, London, Berlin, Milan}
He has participated in major musicals “The Bells of Edelweiss”, “HAIR”, “Jesus Christ Super Star”, “Moby Dick” and has collaborated on the summer concerts of Sakis Rouvas, Stellio Roccos, Panos Mouzourakis and Christos Dantis.

Desperate to expand his horizons and try new collaborations at a creative level, Antonis joins the Celestial keys Records music family and returns in the most spontaneous and enjoyable way to share a favorite song in music with his “friends” and the lyrics of the song “I’m leaving you”.

For the 2019-2020 season, Antonis is in ESTATE CLUB ATHENS with Sakis Rouvas, Helena Paparizou and Stellios Roccos while at the studio for his next artistic steps, as well as preparing for concerts with his band ”Antonis Vlachos Full Band ”.