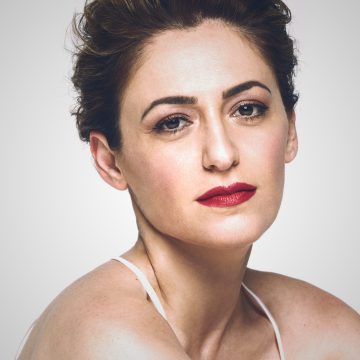 Chrysoula Stefanak was born and raised in Heraklion, Crete. From a very young age to just 5, she started playing piano, being self-taught. At the age of 6 she began piano & guitar lessons, music theory and harmony at the Apollo Conservatory of Heraklion, Crete, which carried on for 12 years.

Later on, she continued her musical education with vocal lessons at the Athens Olympic Conservatory. In Heraklion, Crete, where Manolis Lidakis began to sing professionally and at the same year they collaborated together in summer concerts.

The past 5 years she is next to David Nachmia and they have presented a special performance with retro songs from the 1910s to 1950s.

2002: HEAVEN MUSIC – Soundtrack “As long as there is love” in music by Marios Strofalis.

2001: NITRO MUSIC – Participation in album “Upper Zambetiki”, with lyrics by Pantelis Ampazis and with jokes by Giorgos Zambetas.

2008: PROTASIS RECORDS – Participation in the album “BABIS TSERTOS SINGS MICHAEL SOUGIOUL” (Tribute to the 50th anniversary of the death of Michael Sougioul)

2008: PROTASIS RECORDS – Participation in the album “A Tribute to ATTIK” by David Nachmia.

2009: PROTASIS RECORDS – Participation in the album “From Attik to Gounari” (Live recording with Maria Kanellopoulou, Thanos Polydoras and with the orchestrations of David Nachmia).

2010: PROTASIS RECORDS Personal Discography – “For a Woman” (With songs of the interwar period in orchestrations by David Nachmia).

In the music of Panagiotis Lianos and lyrics by Aikaterini Tempeli, which is a soundtrack of George Triantafyllou’s short film, where he already counts participations in world-wide Festivals such as:

Find the song in all digital stores and streaming services:

Chrysoula Stefakaki “moves on” musically with a wonderful swing in the lyrics and music of the talented Elias Morfidis, from Keys Records!

Chrysoula Stefanaki is at the moment at Patras Summer Carve and in the beginning of autumn she has teamed-up with: Akis Deiksimos, Gregory Petrakos, 15:50, Achilleas Angelopoulos, Valia Somaraki, Giouli Asimakopoulou, Marianna Voulgari and Mary Mitropoulia

Find the song in all digital stores and streaming services: