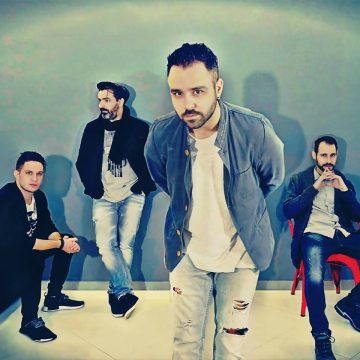 Alchimistes are a special band which started by four friends.

Alchimistes first appeared in the beginning of 2001 by a group of friends, with the idea of combining different musical styles and accents, initially covering well-known songs and later working on their own ideas. First of all, they ‘managed to combine’ electric sound with the Greek sounds and the bouzouki.
Their live shows started from festivals and small venues, while later they participated in various concerts and on a consistent basis in almost all Athens music scenes, such as: Rodeo, Stigma, Athena, To Onoma tou Rodou, Oxygen live, Rhythm stage, Sphinx live stage, Stavros tou Notou and others.
Their collaborations over the years: Dionysis Tsaknis, Vassilis Karras, Markos Seferlis, Kostas Spyropoulos, Kaiti Garmpi, Antonis Gounaris and others.

In August 2017, Vassilis Karras released the song “Smyrnaiko” featuring the music of Alchimistes and the lyrics of Giannis Bournelis.

They successfully started their career in 2001, experimenting with a variety of musical genres, initially writing songs for other artists and then composing their own.

Their peak in 2010, is their collaboration with the great popular singer Vassilis Karras and the great success “Friendly words”.

Alchimistes are all set and just released their new song, titled “Give Me Breath” under their new record label Keys Records!

A melodic song that already has been loved by the fans from day one.